I’m one of the millions of people who come to visit or live in Bangkok, Thailand who, up until recently, hadn’t been to Koh Pha Ngan. Koh Pha Ngan is one of Thailand’s most popular backpacker islands and budget destinations but, as Koh Pha Ngan itself doesn’t have an airport, it’s a huge hassle to get there from Bangkok so I’ve never bothered. But, a couple of months ago, I learned about Nok Air’s new travel package of all-inclusive Flight plus Hi-speed Catamaran in partnership with The PNW, which gets you to Koh Pha Ngan in just a few hours and I was sold.
Who is Nok Air? – For those not familiar with Thailand’s low-cost carriers, Nok Air is a small but reputable low-budget carrier that flies to various destinations all over Thailand. Its flights are basic but extremely cheap and their service is good.

What is the Nok Air to Koh Pha Ngan Travel Package? – Until Nok Air started doing the Koh Pha Ngan travel package, getting to Koh Pha Ngan required taking a flight to Surat Thani, then finding a local bus to take you to the ferry for Koh Pha Ngan. From there, you had to rustle up your own ferry or local boat and, with ferry times not always convenient by the time you got there, getting from Bangkok to Koh Pha Ngan could be all day of a job.

Recently however, Nok Air instituted their own Koh Pha Ngan travel package. As inexpensive as just about every other Nok Air flight, it consists of a flight from Don Muang Airport in Bangkok to Surat Thani in Southern Thailand. From Surat Thani, you’re put on a private air-conditioned coach that drives you to Tong Sala Pier.

At Tong Sala Pier, you board a high-speed catamaran (one of those cool two-hulled boats with a gap underneath it) and after a few minutes wait you’re whisked away on a 45 minute high-speed boat ride that drops you off at Koh Pha Ngan. From start to finish, Bangkok to Koh Pha Ngan the entire trip, depending on which flight you take, takes from six to seven and a half hours. A far cry from the 12-15 hours by doing it yourself. Nok Air does two flights a day – a 7:15 am flight and one at 11:40 am.

How Much is the Nok Air Travel Package? – Like anything else Nok Air does, their prices are always budget. Currently on most days, the Nok Air Bangkok to Koh Pha Ngan travel package costs between 2,690 baht ($91) and 3,300 baht ($104) one-way, depending on which level of ticket you buy. This includes the flight from Don Muang airport to Surat Thani, the air conditioned bus and the high-speed catamaran.

The higher priced ticket is the Nok Plus level, where you can change your flights as many times as you want – perfect if you get to Koh Pha Ngan and love it so much you want to stay longer.

Don’t forget, Nok Air is one of the few airlines that still flies out of Bangkok’s old airport, Don Muang, and not the new airport, Suvarnabhumi. So don’t book your flight then head off to Suvarnabhmi to catch it. The two airports are an hour and a half to two hours apart. You’d never catch your flight. 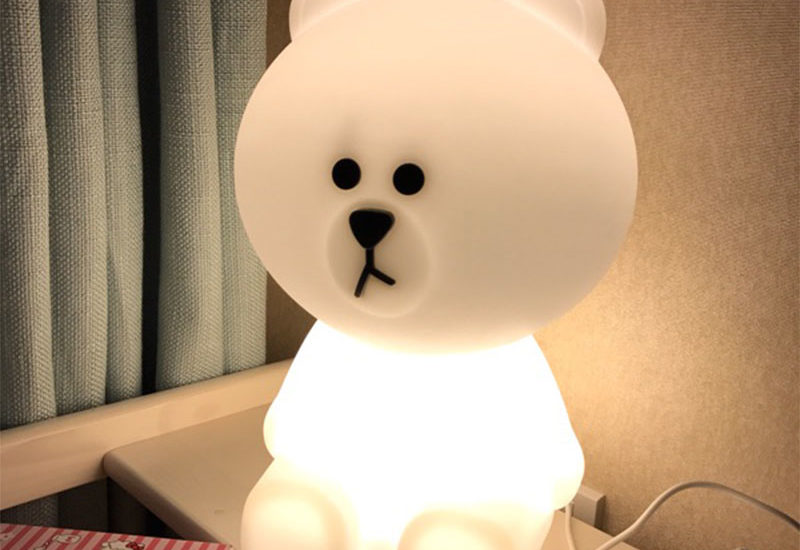 The animal lamp is quirky, creative and has an innocent, light-hearted feel to it. I didn’t purchase it for myself though, I purchased it for my daughter from Ivy and Wilde. Recently she’s had trouble sleeping in the dark (I think she’s been reading too many horror stories!) so I needed to find something that would relax her before bed, but still look nice in her room. Being a young girl, I wanted something more playful and quirkier – rather than a normal boring lamp.

Being slightly old-fashioned, I tend to buy on the high street as opposed to online, so I was a little apprehensive to make the purchase. But the free shipping was a nice little persuader, and the rabbit looked adorable. I work as an interior designer so my own house, as you can guess, is very purposefully designed. The products I buy all add to the ‘look’ I have gone for. With my daughters’ room, I wanted quirky-meets-girly. The rabbit in itself could very well be placed in an adult room, but with the soft hues and minimal design of my daughters’ room, the rabbit casts a lovely warm glow – especially at night.

The shipping went smoothly and arrived quicker than I expected. With a little trepidation, I opened the package. The first thing I noticed about the night light was the size – not big enough to be imposing but still took the focal point of the desk that I placed it on. It fit well into the room, especially because of the neutral colour. I could see this working well for either gender, because it doesn’t particularly radiate a girly or boyish feel. My little girl took to the night-light immediately – she barely gave me time to screw the LED bulb in! While this is both cute and annoying, my daughter is a little finicky when it comes to decorating – I guess she’s a mini me. But it seemed to appease her inner fussiness – especially when night came around and we turned off the main light to see how the night light stood in her bedroom. As the product description states, the low-key light it gives off is perfect for bedtime. It provides enough light to be a comforting fixture, without being bright enough to disrupt sleep. We’ve had some difficulties recently when it comes to getting a restful night’s sleep, but the night light is definitely helping her feel comfortable when the sun goes down.

Being a lightweight structure really impressed me too. It was easy to lift up and assemble the LED bulb into, and also means that if my little adventurer decides to faff with the night light, it won’t cause too much damage if it falls on her! It definitely feels less than 2kg, but it doesn’t take away the high-quality feel of the night light. It’s definitely child-friendly, and I would 100% recommend this to other mums looking to add a little flare of quirkiness/cuteness to their child’s bedroom.

I self-publish and love doing so, but self-publishing is not for everyone. It is a lot of hard work, but than again, so is being traditionally published. My advice? I say to try for both!

If you self-publish via POD than you have printed up this book’s “first edition” and when you finally find an agent and the agent finally finds you a traditional publisher, you will only be able to offer “second edition” (also known as “reprint”) rights. Generally, unless the book as sold over 10,000 copies a publisher will not buy second rights.

Rarely does a first book make over $2,000 for its author.

The average life of a book is 3 months. (meaning the publisher pulls it off the shelves and stops selling it just 3 months after it went to print)

In order to keep you book in print past those 3 months it must become a “bestseller”.

In order to become a bestseller, you must sell an astronomical 10,000 copies in that 3 months time.

Most publishers DO NOT promote your book. The books that become bestsellers had an author that put a lot of their time and money into marketing the book themselves. Most books, regardless of publisher, sell only as many books as THE AUTHOR promotes. This is true wither you publish via Scholastic Books (with it’s 100 new titles each month, including Harry Potter) or Twighlight Manor Press and its 10 books every other year.

Basically, all a book publisher does is list your book in their catalog and hope that bookstores choose to stock it on their shelves.

Books (such as Harry Potter – traditional published- and Eragon -self-published-) get famous, not from the publisher’s promotion, but from THE AUTHOR’S having gone out there and told everyone under the sun how great their book was and paying large amounts of their own money for advertising in such newspapers as The New York Times. In the case of such authors as J.K.Rowlings, Christopher Paolini, Steven King, etc., we are talking hundreds of thousands of dollars of the author’s private pocket money, (money they already had BEFORE book’s release.) Eragon, a self published book, became an over night best seller because of a single one day full page ad in The New York Times, that cost Paolini’s parents over $14,000! Within a few weeks, he had big name book publishers begging to sell the reprint editions.

So you see. What you the author are willing (or can afford) to pay for a marketing campaign is going to determine how many book you sell, not who you choose for a publisher. Keep in mind that when you see ads for book, either in newspapers or on TV, those ads were paid for by the author him-herself, NOT the publisher.

Most writers, once hit in the face with the harsh reality of these facts, never attempt to write a second book, which is why there are so many one-book authors out there.

On the other hand a self-published POD book never goes out of print and you earn 100% of the profits off the retail price.

If you are willing to promote and market your book hard enough, you’ll make more money in the long run by self-publishing, because you can keep selling your book for the next 10 or 20 years.

Your best bet is to hold off on the POD right now, and focus on finding that agent. Let the traditional publisher buy the first edition rights, get paid your advance and your royalties, let them sell the first edition, than next year after the book has gone out of print, you bring it back out as a POD reprint and continue to sell it for the rest of your life. (Many authors do this and after writing four or five books, they have a pretty steady monthly income coming in.)

If you want to have a bestselling book and boost it in the internet, try getting web hosting services. I defnitely recommend you read Canadian web hosting reviews to learn more.